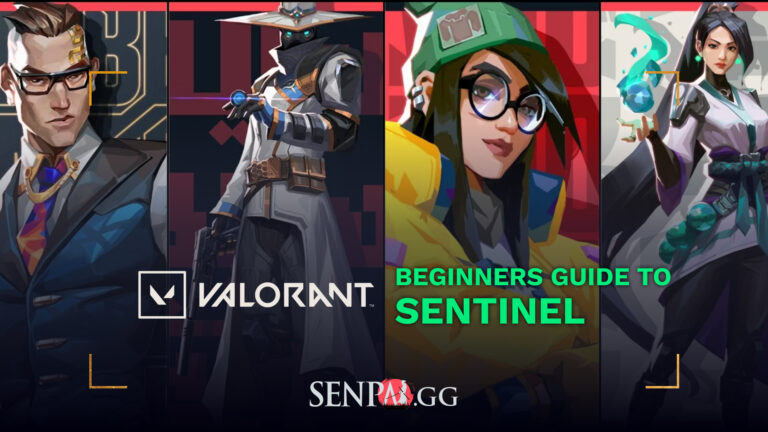 Welcome to the Beginners Guide to Sentinel.

In this guide, we will learn about sentinels and their role in Valorant.

What is a sentinel in Valorant?

Sentinels are one of the four roles of agents in Valorant.

The abilities of a sentinel are primarily focused on supporting the team, like providing intel, healing, protecting your team from enemy flankers, and anchoring down the site.

There are currently four sentinels available to play in Valorant.

Sentinels are defensive experts who can lock down areas and watch flanks, both on attacker and defender rounds. — Official Sentinel Description

What is the role of a sentinel in Valorant?

According to the official Sentinel description, Sentinels excel at defensive-style gameplay.

Sentinels have a wide variety of abilities, from healing to providing intel, stopping or slowing down the enemies from entering the site, and watching your flank. These are all support abilities.

Sentinels excel in a defensive play style; they can anchor down a site and give the enemies a hard time trying to enter a bomb site and plant the spike.

Sage, for example, can completely block off the entry point with her wall.

She can further slow down the enemies’ movement with her slow orb. Sage is one of the most played and best sentinels currently available to play in Valorant.

You aim to enter the bomb site during the attacking stage and plant the spike. You must defend the spike until the time runs out or the entire enemy team is eliminated.

As a sentinel, you must only focus on supporting your teammates with healing and your abilities.

A sentinel must not play aggressively, seeking first bloods and early pickoffs, it is very important for a sentinel to stay alive as much as possible during the round, as most of their abilities are focused on supporting the teammates.

As a sentinel, it is your job to secure the flank; use abilities like Cypher’s trip, Killjoy’s alarm bot, or Chamber’s trademark trap.

Flanking is when an enemy tries to attack your team from behind. These abilities of a sentinel can stop the enemies from flanking while also alerting your team about the enemy behind them.

Once your team successfully plants the spike, your job is to defend it until the time runs out, causing it to explode or eliminating the remaining players of the enemy team.

Stop the enemies from retaking the site.

Use your abilities to stop enemies from entering the site and defusing the spike.

Play along with your teammates, hold cross-fire angles, and constantly support your team.

If the enemies manage to enter the site and plant their spike, you must defuse the spike to win the round.

The defending stage is where the sentinels excel; their ability to anchor down a site will make it hard for the enemies to enter the bomb site.

Hold the site and wait for your teammates to rotate.

But if the enemies have managed to successfully enter the site and plant the spike, you must perform a retake.

When you retake a bombsite, you retake control of the site that was captured by the enemies. It is very similar to attacking a site.

Maintain consistent communication with your teammates and constantly provide them with support; assist your duelists in retaking the site.

This brings us to the end of our Beginners Guide to Sentinel.