Best agents to play on Split 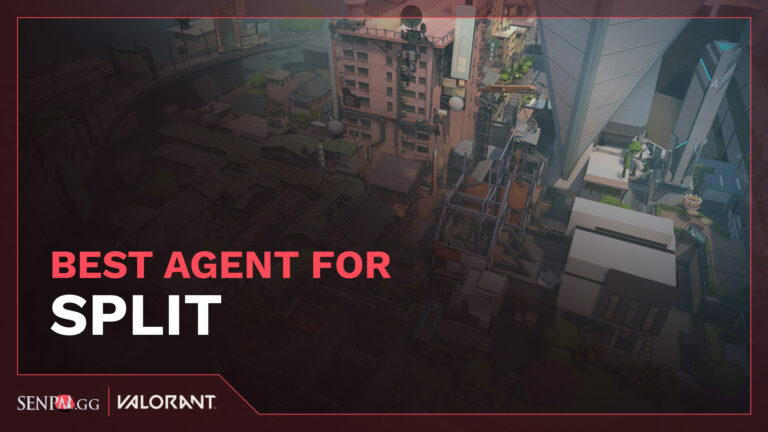 Welcome to our “Best agents to play on Split” guide.

Split is one of the most popular maps in Valorant. Due to the addition of a lot of new maps, Split has been removed from the map pool.

However, the new map rotation in the upcoming update will include Split. So, here’s our guide to picking the best Split agents.

Best agents to play on Split

We will be choosing one agent for each role. These picks are based on the split’s pick and win rate when it was still available to play.

Breach takes our best initiator spot. Breach’s utility is most suitable on a small map like Split. There are many good spots to use his flash ability, making it easier for your team to enter the site.

Because Split is a small map with many tight corners, the aftershock is one of the most effective abilities for clearing them.

Breach’s “Faultline” and “Rolling Thunder” are what make him the best initiator on Split. Faultline travels in a straight line and is most effective on a map like Split.

Breach’s ultimate has a huge area of effect, and Split being the smallest map makes him deadly when attacking and retaking a site.

Omen is our controller of choice to play on Split, Omen is a perfectly suitable smoker on this map.

Two charges of Dark Cover are enough to block the enemies’ vision while entering a site. Paranoia is what makes him the best Split controller.

Paranoia, similar to Faultline, travels in a straight line, making it an effective ability to blind multiple enemies at the same time. Most of the layout on Split is straight and long, making abilities like Paranoia and Faultline very useful.

While playing Omen on Split, there are good spots to use your teleportation abilities, allowing you to play aggressively.

On Split, there are many good sentinel agents to play, but we chose Cypher as the best sentinel because of his effectiveness.

With recent buffs to Cypher, this makes him an even better agent to play on Split.

While defending, Cypher’s abilities like Trapwire and Cyber Cage allow him to single-handedly hold a bomb site.

There are many great spots to use your spycam and tripwire. Spamming with a Phantom through your cyber cage will fetch you easy kills on Split, as there are not many angles where the enemies could attack from.

Neural theft now reveals the enemies twice, and on a small map like Split, this ultimate ability is very effective.

Raze is our choice of duelist to play on Split.

The narrow layout of the map and many tight corners allow Raze to be the best agent.

Raze’s boombot excels at gathering information, and there aren’t many angles where the enemies could be hiding in a map like Split.

Once you learn how to satchel jump, Split will become your favourite map to play Raze. A combination of satchel jump and Raze’s Ultimate allows you to be the most aggressive agent.

Raze can easily attack any of the bomb sites in Split. Use your abilities wisely to enter a bomb site. Boombot gathers most of the information. Use your Paintshell to clear tight corners and satchel jump to get to a point quickly.

Raze’s entire utility is focused on dealing damage, and in a narrow map like Split, Raze proves to be the most effective duelist.

This brings us to the end of your “Best agents to play on Split” guide.

You can find more map guides below: