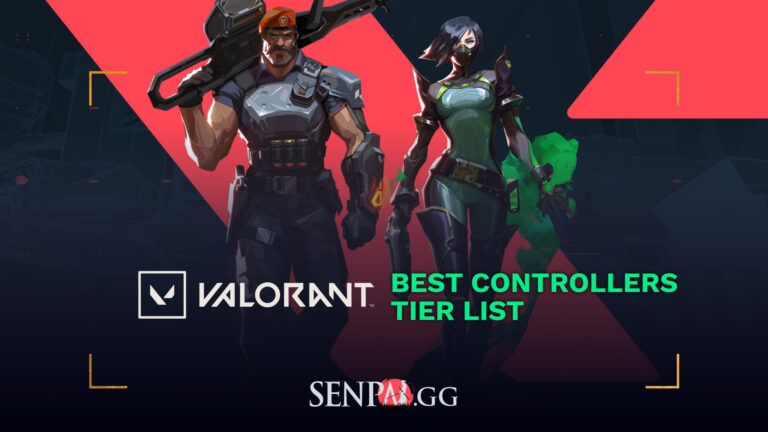 Valorant has four different roles, among which Controllers is one; in this guide, we bring you the Tier List of the Best Controllers in Valorant.

What is a Controller in Valorant?

Controllers are among the four roles of agents divided in Valorant; their abilities help in blocking the vision of your enemies, taking control of an area, assisting your teammates and forcing enemies to re-position.

Their abilities are mainly Smoke, Molotovs and Deterrents.

What is the role of a Controller in Valorant?

While Attacking as a Controller, your objective is your assist your team in entering and taking control of the bomb site while smoking off the enemy vision and forcing any enemies to change their position from a safe spot to a choke point.

While Defending, a Controller’s objective is to smoke the entries and openings of a bomb site and use abilities like molotovs and deterrents to stop the enemies from entering.

Astra is one of the unique agents in Valorant; her abilities are not so straightforward, making her not a beginner-friendly Agent.

To use Astra’s abilities, you first need to enter into “Astral Form” and place stars. These stars are further used to activate her abilities.

Gravity Well is a displacement/crowd-control ability. Place a star and activate Gravity Well to pull the players towards the star’s centre and make them Vulnerable.

Nova Pulse is another crowd-control ability. Place a star and activate Nova Pulse, causing it to explode and concuss the enemies after a brief delay.

Nebula is a basic smoke ability; place a star and activate it to transform into smoke. Dissipate is used to take back the stars already placed; dissipate will also create a very short-lasting smoke.

Cosmic Divide blocks vision and blocks the bullets from passing through. Abilities and Agents can still pass through the wall. Cosmic Divide is Astra’s ultimate ability.

Despite being a controller, Omen’s abilities allow you to play a little aggressively like a duelist.

Shrouded step is a simple teleportation ability; activate the ability and mark a location within the radius to teleport.

Dark Cover is Omen’s signature ability. Omen can smoke anywhere across the map, creating a long-lasting sphere that blocks vision.

Omen’s ultimate ability, From the shadows, allows him to teleport anywhere across the map. Activate the ability and choose a spot, Omen appears as a shade, and after a brief delay, he teleports to the spot. Enemies can cancel the teleport by shooting his shadow.

A combination of smokes and molotovs makes Viper one of the best controllers in Valorant. Viper has two passives. Fuel and Toxin.

Snake Bite is a Molotov ability, any enemies that come into contact with this ability lose their health gradually and become vulnerable.

Poison Cloud is Viper’s smoke ability; this ability consumes Fuel. Enemies that come in contact with the poison cloud are affected by Toxin, which temporarily decays their health.

Toxic Screen is a massive vision-blocking ability; this ability can pass through walls blocking enemy vision and applying “Toxin” to enemies who come in contact with it. This ability also uses Fuel.

Viper’s Pit creates a huge poison cloud; this cloud remains for an infinite amount of time as long as Viper remains inside. Enemies that come in contact with the Viper’s Pit are affected by Toxin, which decays their health.

Brimstone is one of the most beginner-friendly Agents in Valorant. His abilities are straightforward to use.

Stim Beacon creates a field that empowers Brimstone and his teammates, granting them increased movement speed and fire rate.

Incendiary is a simple Molotov ability; upon detonation, it spreads out, causing massive amounts of damage to the players in its radius.

Sky Smoke is Brimstone’s signature ability; equip a tactical map and choose where to smoke.

Orbital Strike is a massive deterrent ability. Equip the tactical map and choose where to use this ability. Orbital Stike has a very long radius and does enormous amounts of damage to the enemies.

This brings us to the end of Best Controllers in Valorant; if you have a different tier list to suggest, let us know in the comments.