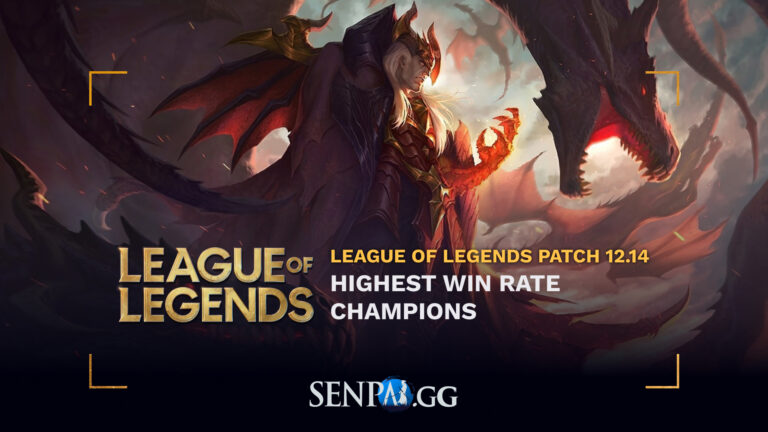 Since Riot made their changes on the mechanics of a few champions, we are now witnessing some overpowered names in patch 12.14. They are literally dominating the Summoner Rift with their new power. If you want to play rank and catch up with the meta, let’s follow us to see which champions currently have the highest win rate in patch 12.14. Check out our Tier List for more details.

On top of the board is the infamous Swain with a 55.38% win rate. Swain is currently one of the finest champions to play in the bot lane thanks to his high base health and healing skills. He can deliver a lot of damage during the laning phase with his E + Q combo, which makes the enemy very irritated. Furthermore, Swain’s W may tell allies about the position of the opponent jungler, which is why many high-skilled players choose to use him as support. A good Swain player will be able to alert teammates of danger and check for sight constantly.

In the few previous patches, there was no place for Taric support or top. He was actually on the ground for a very long period of time. But now, Taric is making his comeback surprisingly with a 55.09% win rate in patch 12.14. There is actually a reason for that. Since Enchanters were nerfed by Riot real hard, Taric now has a chance to shine in the Summoner Rift again. He is a really good tanker and a great option for team fight with his ultimate. Other than that, Taric has a high healing ability and inhibition thanks to his Q. Let’s make Taric great in the Summoner Rift again.

Ever since Amumu Q was changed to 2 casts, his strength is unlike before. Amumu is constantly having a very good win rate in a long time, and now he ranks 3rd on the board with a 54.82% win rate. In the early laning phase, Amumu can quickly clear the monsters in the jungle and perform his gank soon. For squishy champions, he can easily get a kill if he can land his Q precisely. In combat, Amumu’s ultimate is undoubtedly OP when he can stun enemies in a large area, which creates a high chance of winning a team fight.

Even though Rell is not a popular choice for many players to go for Support, she is still a super strong champion in both the laning phase and team fight. This is proven by her 54.72% win rate in patch 12.14. Rell is hard-to-play support when you need to learn how to control her mechanics smoothly in order to be effective. She is not for newbies and low-skilled players, however, in Master rank and above, Rell is a favorable supporter that any ADC wants. You can give her a shot to figure out why she is having a high win rate.

No mid laners or ADCs made it to the top 5 highest win rate champions by SenpAI, but Yorick is here to save the day for the top lane with a 54.24% win rate. No matter what meta, Yorick is always a super strong champion that no top laners want to face. He is a pusher, a destroyer, and a nightmare to the turrets. If the opponent leaves the top lane for 5 minutes, there is a high chance that their base will be demolished in no time. Yorick has a good capability to 1v1 or 1v2 so it is hard to gank him successfully. You should give him a try to increase your win rate.