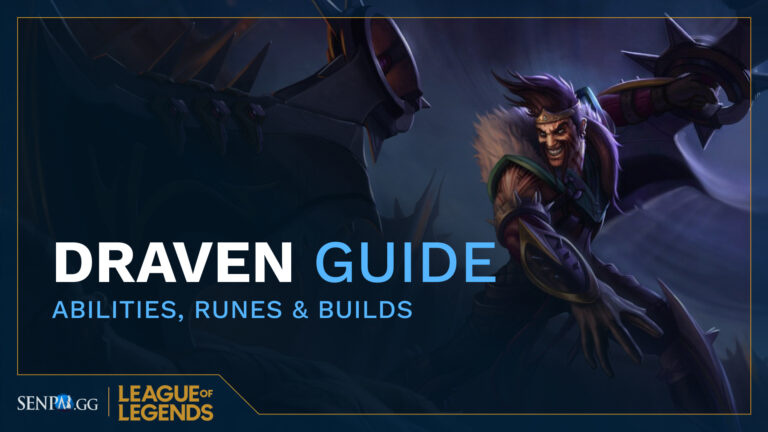 Welcome to our comprehensive guide on how to play Draven, the Glorious Executioner, in League of Legends! Draven is a marksman champion known for his high damage output and flashy playstyle. He is a fan favorite due to his cocky attitude and love for the spotlight, which is reflected in his kit and gameplay. In this guide, we will cover Draven’s abilities, runes, builds, and how to effectively play him in different stages of the game. We will also discuss the champions who counter Draven and the champions he counters.

Before we dive into the specifics of playing the champion, let’s first look at his kit and understand his strengths and weaknesses.

Draven’s passive is called League of Draven. Whenever Draven kills a minion, monster, or champion, he gains a stack of Adoration. He consumes the stacks to receive bonus gold upon killing a target. Additionally, his Spinning Axe’s cooldown is reduced by 1 second for each stack of Adoration consumed.

This passive is a crucial part of Draven’s kit as it allows him to gain a significant amount of gold and farm faster than other marksmen. It also helps him to spam his Spinning Axe more frequently, which increases his damage output.

Spinning Axe is Draven’s main source of damage. It is a skillshot that can be thrown in a specific direction. Upon hitting a target, the axe deals physical damage and bounces back to Draven, who can catch it to reset the ability’s cooldown and reduce its mana cost.

The key to mastering Draven’s Q is to aim it at enemy champions, as it deals increased damage to them. It is also essential to catch the axe whenever possible, as it reduces the cooldown and mana cost of the ability, allowing Draven to use it more frequently.

Blood Rush is Draven’s mobility ability. It increases his movement speed and attack speed for a short duration, and the bonus is increased if he is moving towards a wounded enemy champion.

This ability is useful for chasing down enemies and catching his axes. It is essential to use Blood Rush whenever it is off cooldown, as it significantly increases Draven’s damage output and mobility.

Stand Aside is a utility ability that allows Draven to knock aside enemies in a line and slow them. It is a useful ability for positioning and kiting enemies, as it allows Draven to create distance between himself and his enemies.

Whirling Death is Draven’s ultimate ability. It is a long-range skillshot that deals physical damage to all enemies it passes through. The damage of the ability increases based on the distance traveled, and you can reactivate it to redirect the axes back to the champion.

Whirling Death is a powerful ability that can be used to deal massive damage to enemy champions and clear waves of minions. It is essential to aim it correctly and reactivate it at the right time to maximize its damage potential.

Draven is a strong marksman due to his high damage output and ability to farm efficiently with his passive. He excels in team fights and can single-handedly carry games with his ultimate and Spinning Axe.

However, Draven is also a high-risk, high-reward champion. He is vulnerable to being ganked and relies on catching his axes to maintain his damage output. He also lacks mobility, which can make him an easy target for the enemy team to focus in team fights.

Another weakness of Draven is his reliance on positioning. He needs to be in a good position to catch his axes and make the most of his abilities, which can be difficult to do in the heat of battle.

There are many different ways to build Draven, but the most common and effective build is a crit-heavy build that focuses on maximizing his damage output.

Here is a sample build that you can follow:

Doran’s Blade: This is a good starting item for Draven as it provides him with some early game damage and sustain.

Infinity Edge: This is a must-have item for Draven as it increases his crit damage significantly, making him a formidable damage dealer.

Phantom Dancer: This item provides Draven with increased attack speed and crit chance, which synergizes well with his kit.

Rapid Firecannon: This item increases Draven’s range and provides him with a unique passive that allows him to critically strike from a longer distance.

Bloodthirster: This item is a good choice for Draven if you are ahead and want to increase your damage and sustain.

Last Whisper: This item is useful against enemy teams with a lot of armor, as it allows Draven to deal more damage to them.

Guardian Angel: This item is a good choice if you are facing a lot of burst damage or need some extra survivability.

Blade of the Ruined King: This item is a good choice if you want to increase your sustain and waveclear, as it provides you with a percentage of the target’s maximum health as bonus damage.

The best Draven runes are:

The Precision tree is the best choice for Draven as it provides him with increased attack speed and crit chance, which synergizes well with his kit. Fleet Footwork is a good Keystone for Draven as it allows him to heal when he lands a critical strike, providing him with some extra sustain.

The Domination tree is also a good choice for Draven, as it provides him with some extra damage and sustain. Taste of Blood is a good choice as it allows Draven to heal when he damages an enemy champion, and Ravenous Hunter allows him to sustain his damage output by healing for a percentage of the damage he deals.

In the early game, Draven’s main focus should be on farming and positioning. He should try to catch as many axes as possible to reduce the cooldown and mana cost of his Q, which will allow him to farm more efficiently. He should also be careful of enemy ganks and try to position himself safely to avoid getting caught out.

In the early game, it is also essential for Draven to get as many stacks of Adoration as possible. He should try to kill as many minions and monsters as possible to gain these stacks, which will provide him with a significant gold advantage over his lane opponent.

If the opportunity arises, Draven should also try to get some early kills by predicting the movements of his lane opponent and using his Q and W to chase them down.

During the mid game, Draven should also try to secure objectives such as dragon and tower kills. These objectives will provide his team with a gold and map control advantage, which can be crucial in winning the game.

In the mid game, Draven should also try to roam to other lanes and assist his team in securing kills and objectives. He can use his E to knock aside enemies and create openings for his teammates to follow up on.

In the late game, it is essential for Draven to catch as many axes as possible to maintain his damage output and reduce the cooldown of his abilities. He should also  use his E to create distance and kite them.

During the late game, Draven should also try to secure objectives such as Baron Nashor and the enemy nexus towers. These objectives will provide a significant advantage for his team and can help to win the game.

There are several champions who can counter Draven in the bottom lane. These champions generally have abilities that can disrupt his positioning or disrupt his ability to catch his axes.

Some of the champions who counter Draven are:

Vayne: Vayne is a strong counter to Draven due to her mobility and ability to reposition herself. She can use her Q to dodge Draven’s E and her E to condemn him into a wall, disrupting his positioning.

Tristana: Tristana is another champion who can counter Draven due to her long-range and burst damage. She can use her E to knock Draven back and interrupt his ability to catch his axes, and her R to burst him down.

Lucian: Lucian is a strong counter to Draven due to his mobility and ability to kite him. He can use his E to dash away from Draven’s E and his R to deal burst damage to him.

Graves: Graves is a strong counter to Draven due to his burst damage and ability to disrupt his positioning. He can use his E to kike Draven and his R to burst him down.

There are also several champions that Draven counters in the bottom lane. These champions generally have low mobility or are vulnerable to sustained damage.

Some of the champions that Draven counters are:

Ashe: Ashe is vulnerable to sustained damage from Draven due to her low mobility. Draven can use his Q and W to chase her down and secure kills.

Sivir: Sivir is another champion that is vulnerable to sustained damage from Draven. She lacks mobility and is susceptible to being kited by him.

Caitlyn: Caitlyn is a long-range marksman who is vulnerable to being kited by Draven. She lacks mobility and is susceptible to sustained damage from Draven’s Q and W.

Draven is a strong marksman who excels in dealing sustained damage and farming efficiently with his passive. He is a high-risk, high-reward champion who can single-handedly carry games with his ultimate and Spinning Axe.

To effectively play Draven, it is essential to focus on positioning and catching your axes to maximize your damage output and reduce the cooldown of your abilities. It is also important to build crit-heavy items to increase your damage, and choose the Precision and Domination runes to increase your attack speed, crit chance, and sustain.

Finally, be aware of the champions who counter Draven and the champions he counters, and try to play accordingly to maximize your chances of winning. With practice and the right strategies, you can become a formidable Draven player and carry your team to victory.