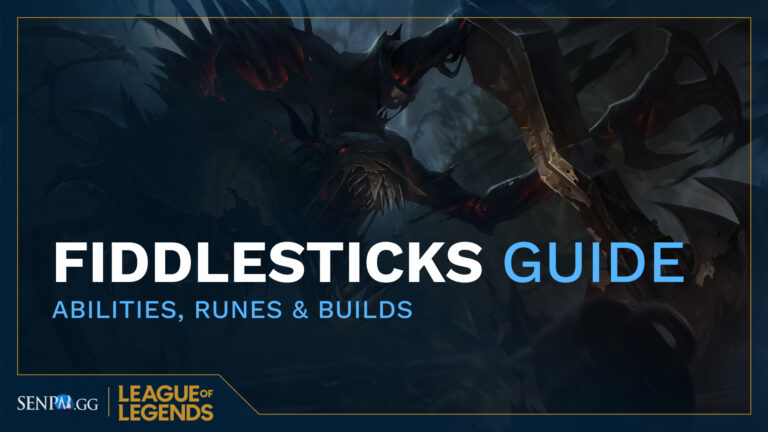 Welcome to our comprehensive guide on how to play Fiddlesticks in League of Legends! Fiddlesticks is a terrifying champion that excels in the role of a jungler. With his kit of crowd control and burst damage, he can easily take down enemy champions and make plays all over the map. In this guide, we’ll cover the best Fiddlesticks build, runes, and gameplay tips to help you dominate the rift as the Harbinger of Doom.

Now that we’ve covered Fiddlesticks build and runes let’s talk about gameplay. As a jungler, Fiddlesticks’s primary role is to gank lanes and help his team secure kills.

In the early game, you’ll want to focus on clearing your camps and looking for opportunities to gank. Fiddlesticks’s kit has good crowd control, so if you can land your Terrify on an enemy, it’s usually an easy kill for your laner. Just be sure to communicate with your team and let them know when you’re looking for a gank.

As you progress into the mid-game, you should continue to look for opportunities to gank and make plays around the map. The champion excels at ganking enemy champions, so try to coordinate with your team and set up ambushes or pick off isolated enemies. You should also be looking to secure objectives like dragons and towers, as Fiddlesticks is a strong split pusher due to his fear and damage.

In the late game, your main focus should be on team fighting and using your abilities to control the enemy team. Fiddlesticks’s ultimate, Crowstorm, is a powerful initiation tool that can easily turn the tide of a team fight. Try to land it on as many enemies as possible and follow up with your Terrify and Drain to control and burst down the enemy team. Just be sure to position yourself well and avoid getting focused down by the enemy team.

Now let’s talk about champions that counter Fiddlesticks. One champion to watch out for is Olaf, as he is immune to Fiddlesticks’s Terrify and can easily take him down with his true damage and sustain. Graves and Nidalee are also strong counter-picks, as they have mobility and burst damage to avoid Fiddlesticks’s abilities and take him down.

On the flip side, there are also several champions that Fiddlesticks counters. Sona and Janna are both very vulnerable to Fiddlesticks’s crowd control and burst damage, so try to target them in team fights. The champion is also a strong counter to champions like Malzahar and Swain, as he can easily disrupt their channels and take them down with his burst damage.

In conclusion, Fiddlesticks is a powerful champion that excels in the role of a jungler. With the right build, runes, and gameplay, he can easily take down enemy champions and make plays all over the map. Just be sure to watch out for his counters and try to target his weaker opponents in team fights. Follow these tips and you’ll be well on your way to mastering the champion and dominating the rift as the Harbinger of Doom.