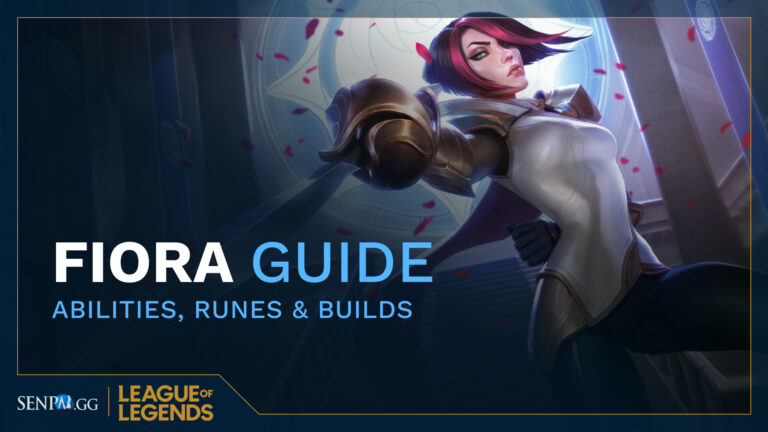 Welcome to our guide on how to play Fiora in League of Legends! Fiora is a popular pick in the top lane, known for her high mobility and damage output. In this guide, we will cover everything you need to know about playing Fiora, including her abilities, how to build her, what runes to use, and how to counter her. We’ll also go over Fiora’s strengths and weaknesses, and provide tips on how to play her at different stages of the game.

Fiora is a mobile fighter who excels at dueling and taking down enemies one-on-one. Her kit is designed around her passive ability, Duelist’s Dance, which allows her to challenge enemy champions and gain movement speed when she hits them with basic attacks.

Fiora’s passive allows her to challenge enemy champions by marking them with one of four Vitals. When she hits an enemy with a basic attack, she will strike their Vital, dealing bonus physical damage and gaining movement speed. Striking all four Vitals will reset the duration of the passive and apply a heal based on the target’s maximum health. This passive is a great tool for harassing and trading damage in the early game, and it allows Fiora to kite her enemies and escape from danger.

Fiora’s Q is Lunge, a powerful gap closer that allows her to dash forward and strike an enemy, dealing physical damage and marking them with a Vital. Lunge has a low cooldown and can be used to initiate fights, chase down enemies, or escape from danger. It can also be used to reposition Fiora in team fights and chase down low-health enemies.

Fiora’s W is Riposte, a defensive ability that allows her to parry enemy basic attacks and abilities, dealing damage and stunning the attacker. Riposte is a great tool for trading damage in the early game and can be used to counter enemy champions who rely on basic attacks or auto-attack reset abilities. It’s important to note that Riposte can only be activated while in combat, so be sure to use it wisely.

Fiora’s E is Bladework, a versatile ability that increases her attack speed and allows her to alternate between basic attacks and Lunge for a short duration. Bladework can be used to deal burst damage in short trades, or to sustain damage in longer fights. It’s a great tool for dueling enemy champions and can be used to chase down low-health enemies.

Fiora’s ultimate ability is Grand Challenge, a powerful ability that allows her to challenge an enemy champion and gain a shield based on their maximum health. If Fiora is able to strike all four Vitals within a certain timeframe, she will gain a massive attack speed boost and a heal based on the target’s maximum health. Grand Challenge is a great tool for picking off enemies in the late game and can be used to initiate fights or turn the tide of a team fight.

Fiora is a mobile fighter who excels at dealing physical damage, so it’s important to build items that enhance her attack speed and damage output. Here is a common Fiora build that focuses on maximizing her damage and mobility:

Fiora’s runes should focus on maximizing her damage and mobility. Here is a common rune setup for Fiora:

In the early game, Fiora’s main priority should be farming and harassing her opponent in the top lane. Use your Q and passive to trade damage with your opponent and try to get them low enough that you can all-in and kill them. Be careful not to overextend or get caught out, as Fiora is vulnerable to ganks and has no escape abilities.

If you’re able to get ahead in the early game, you can look to roam and help your teammates secure objectives or get kills. Fiora is a strong duelist, so look for opportunities to 1v1 enemies or pick off low-health targets. Just be sure to communicate with your team and coordinate your movements.

In team fights, Fiora’s job is to deal as much damage as possible and take down enemy carries. Use your Q and E abilities to initiate on enemies or chase down low-health targets, and use your W to parry enemy abilities or basic attacks. Be sure to use your ultimate wisely, as it can be a game-changer in team fights if used correctly.

In the late game, Fiora’s role is similar to the mid game, with a focus on team fighting and taking down objectives. Look for opportunities to split push and pressure enemy towers, and be prepared to join your team for fights when necessary.

In team fights, Fiora’s job is still to deal as much damage as possible and take down enemy carries. Be sure to use your ultimate wisely, as it can be a powerful tool for picking off enemies or turning the tide of a fight. You should also be prepared to defend your team’s carries and protect them from enemy assassins or divers.

Fiora is a strong champion, but she does have some weaknesses that certain champions can exploit. Here are a few champions who counter Fiora:

Garen: Garen is a tanky top laner who can withstand Fiora’s damage and has a silence ability that can prevent her from using her Q or E abilities.

Renekton: Renekton is a mobile fighter who can outtrade Fiora in short bursts and has a stun that can prevent her from using her Q or E abilities.

Teemo: Teemo is a nuisance for Fiora, as he can poke her with his ranged attacks and blind her, which reduces her damage output.

Riven: Riven is a strong counter to Fiora, as she can outtrade Fiora in short bursts and has a stun that can prevent her from using her Q or E abilities.

Fiora is a strong champion who excels at dueling and taking down enemy champions one-on-one. Here are a few champions that Fiora counters:

Darius: Darius is a melee fighter who is vulnerable to Fiora’s mobility and can be kited by her Q and E abilities.

Jax: Jax is a melee fighter who relies on basic attacks and auto-attack resets, which Fiora’s W ability can counter.

Tryndamere: Tryndamere is a melee fighter who relies on crits and mobility, but Fiora’s E ability allows her to chase him down and outtrade him in short bursts.

Vayne: Vayne is a ranged carry who relies on basic attacks and auto-attack resets, which Fiora’s W ability can counter.

In conclusion, Fiora is a strong and versatile champion who excels at dueling and taking down enemy champions one-on-one. By building her correctly, using the right runes, and playing to her strengths at different stages of the game, you can become a formidable force with Fiora in the top lane. Just be sure to watch out for her counters and be prepared to adapt to different situations.

We hope this guide has been helpful and has given you the tools you need to succeed with Fiora in League of Legends. Good luck on the rift!