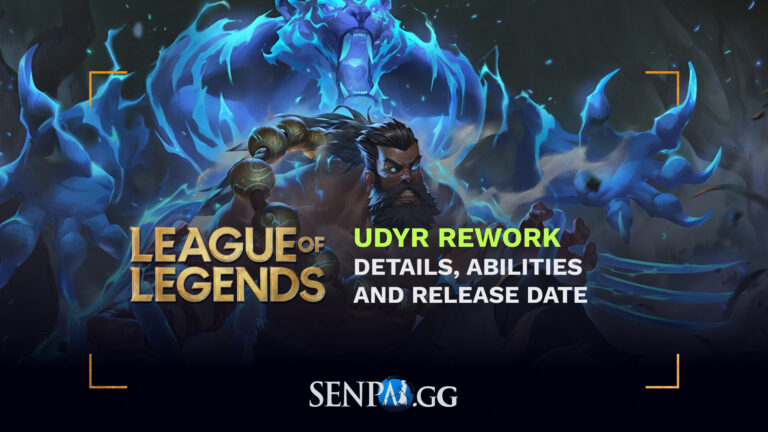 The next significant VGU coming to League of Legends in Season 12 is Udyr rework. Although Riot is maintaining a new kit that is comparable to his previous stance-based one, the Freljordian Spirit Walker has undergone a complete cosmetic and gameplay change. Follow SenpAI to keep updating new changes together with the new Udyr Rework.

The redesigned Udyr abilities in League of Legends are closely similar to his previous equipment. The Freljord’s elements are all familiar to the Spirit Walker, who uses the power of four demigods to his advantage. He uses Q, Wilding Claw, a Volibear channel, to attack. He gains increased damage and attack speed for a few attacks, somewhat similar to the previous Tiger Stance.

That’s a recurrent theme in all of his abilities: maintain the same effects but link them to Freljordian legend. His W is still a shield, but it now bears the name Ildhaurg, the Iron Boar. Udyr’s E, now known as Blazing Stampede, is similar to the Bear Stance that gamers know and love (or despise), but with the extra strength of Ornn.

The most noticeable difference is in his R. Rather than being a flaming phoenix, Udyr summons Anivia with Wingborne Storm to freeze the battlefield.

Udyr’s revamped kit varies from what players are already familiar with because of his new passive, Bridge Between. It allows Udyr to Awaken one of his postures every now and again, giving it a massive boost in power. The importance of chaining together the correct series of positions to Awaken the best one for the job cannot be overstated. All of Udyr’s skins, including his 3250 RP ultimate Spirit Guard aesthetic, will be redesigned, as with every VGU. A complete list of his cosmetics may be seen here.

There is a goal with these reworked designs though: keeping his Shaman identity.