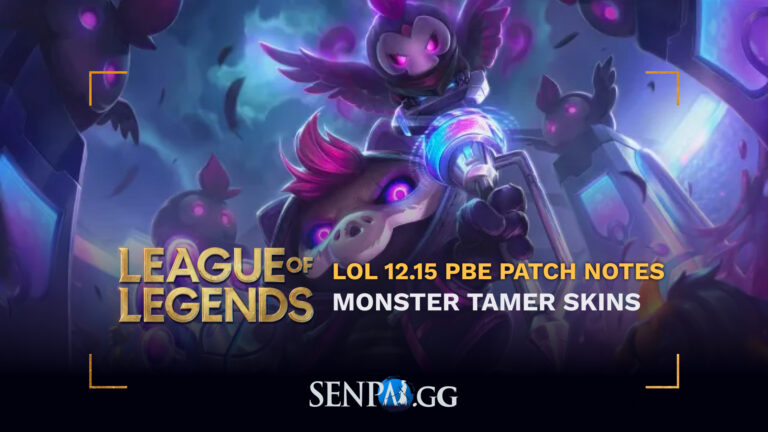 Monster Tamer Skins is coming to town and Veigar has made his comeback. The next League of Legends Patch 12.15 will give him a brand-new skin in addition to the first mythic chroma. You can immediately try it out on the PBE server anytime. Apart from that, Riot has been teasing about their big updates on Udyr VGU and Aurelion Sol’s rework. Let’s figure them out with SenpAI in our LoL 12.15 PBE Patch Notes.

If you’re already on PBE and want to test the upcoming Udyr VGU or lack thereof, try testing the future skins instead. Let’s get to the brand-new Monster Tamer skins that were teased back in 2021. Veigar, Lulu, and Kog’maw are the three champions chosen to appear in this collection.

We will have to wait even longer for the Ahri ASU and the Udyr VGU to release since they are not yet included in the PBE patch. Reav3 recently informed us on Reddit that the Udyr VGU was imminent, making fans eager for the upcoming League of Legends patch.

However, the Udyr main Subreddit will remain vacant for the time being. You will be wrong if you assumed that Patch 12.15 would be the time to start getting excited for Udyr, and you would have to wait for Patch 12.16.

We might have to wait until after the 2022 League of Legends World Championship for this update. Mainly because people expect Ahri’s ASU to release around the same time as the new top lane champion, but Riot isn’t confirming anything.

Even though Riot hasn’t released Udyr VGU to the Summoner Rift, you still can hope for the day will come soon. Let’s keep updated by following SenPAI for more good and useful content.