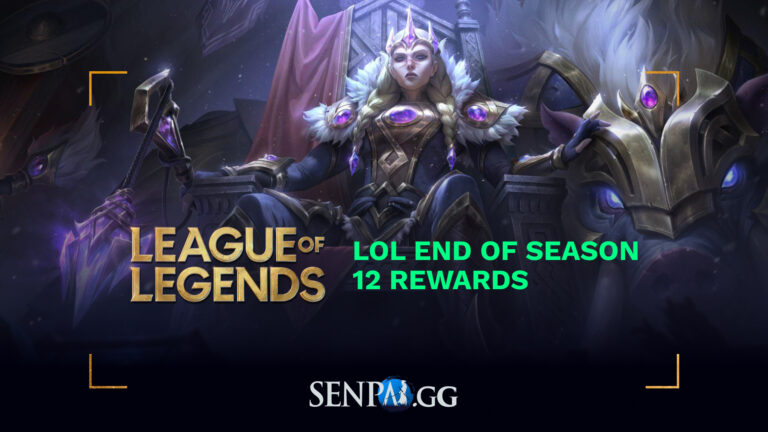 Finally, after its start on January 7 of 2022, LoL Season 12 is already coming to an end. While there’s still a few weeks left for November 14th, Riot has already revealed the LoL end of season rewards. In this SenpAI entry we’re gonna talk about all of them, the planned season 3 clash rewards and honor rewards.

Season is ending soon, one way to clutch your end of season goals is playing the best champions, and of course the more easier ones. Check our tier list to find who’s the ONE for your role.

What every player from the start of the season was waiting, the good old season rewards. For the Victorious Skin this year, Riot decided to give it to Sejuani, and certainly the Freljord Boar Queen ilooks mighty. To receive this skin you need to at least place Gold in either Ranked Solo/Duo or Flex mode.

Elligible players for the LoL End of Season 12 Rewards need to play with Honor. Quite literally, if you weren’t a good summoner you won’t be able to receive your end of season rewards. There are few weeks left to get Honor 2 before season ends.

The minimum honor to get rewards is Honor Level 2. Account or chat suspensions will affect your possibilities to achieve this. On top of that, honor 5 rewards for this season looks pretty good.

Chromas for Each Extra Tier

If you were able to reach even further than Gold on your rankeds, you are going to receive special chromas for Solo/Duo and Flex, each unique.  Hence, if you got Diamond in Flex and Diamond in Solo/Duo, you’ll receive  different chromas intended for each ranked que, so you receive four chromas.

As well, if you finished Ranked placements in Solo/Duo, Flex, or both, you will receive an Eternal Sejuani Series 1 Permanent, a ranked profile icon for you highest rank in both Solo/Duo and Flex queues, and a Ranked profile banner trim.

Scheduled to funnily finish almost at the same time that Season 12 ending is the Third Seaon of Clash. And for it, there a number of Rewards for the teams that got well placed and also participants throughout all of this clash season.

All players that participated in Clash will receive a Clash Contender Icon for participating in any of them. The special rewards you’ll get will depend on your number of Victory Points earned throughout the season.

Lastly,  the End of Season Honor rewards. Riot likes to rewards players that play clean, communicate with positives and no toxicity, and make the play experience for others, something enjoyable.

And for those honorable players the most exciting reward for this season has to be the addition of a new skin line Three Honors.  The first skin from Three Honors will feature the Prophet of the Void Malzahar. But, don’t get too excited you need to be at least Honor 5 to claim it.

In addition, each player starting from Honor Level 3 will receive an special reward.

If you end the Season 12 with Honor 5, you’ll obtain for free the Three Honors Malzahar Skin along with the champion if you do not currently owned it.

End of the Season Rewards Conclusion

What you’re excited most about. Do you like more the Sejuani Skin or are more fond of the Tree Honors Malzahar. Season 12 will end very soon, so better clutch in those extra games to achieve your ranking goal.

Until next time, to get more chances to have extra chromas for your Sejuani Victorious Skin check our Tier List, Best simple and OP champions will get you there.