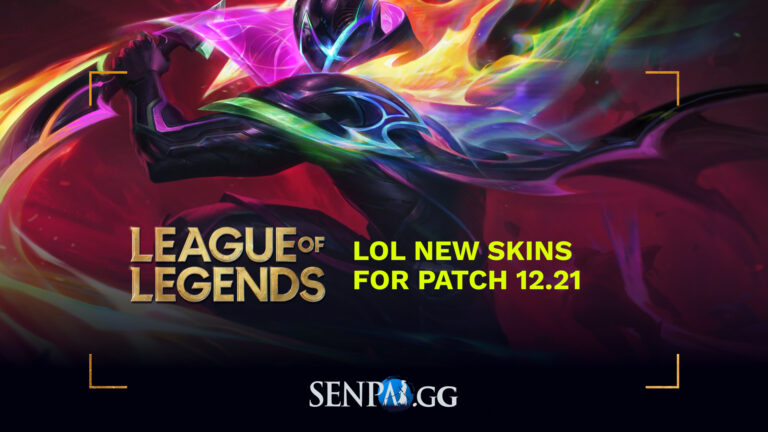 End of season will feature a new galactic dimensional themed skins. Inmerses you on a new universe before known in the League of Legends Skin Universe, Neon Strata. In this SenpAI entry, we’re gonna talk about these LoL New skins for patch 12.21.

Different to the Event Horizon Universe, that represents vastness of cosmos (Cosmic and Dark Cosmic). This one is based on a cosmic force called the Foreglow, represented curiously in votalile neon flames.

After an anomaly of this cosmic phenomenon,  it created the first Empyrean (Pyke), beings coloured with Neon bright colors and inmense power.

Description from the game:

Few know of the Foreglow, and even fewer have seen its volatile neon flames. Normally a cosmic balancing force, something has tipped the scales, causing realms to collapse and funnel the Foreglow’s power into single beings. Now known as Empyreans, these otherworldly forces of nature blaze a trail through the realms, each with their own agenda. The fire is spreading, with no end in sight.

Bladerunner meets Cosmic forces. The palette of this skin much as like blacks and galatic ethereal like the space colors, the Empyrean combines it with the fluorescent and vibrant colors of neon.

Don’t know if it was inspired by the recent success of series like Cyberpunk Edgerunners, but this new cosmic themed skin line with dimensions jumps (Multiverse), but this LoL new skins looks amazing.

The first Empyrean and the legendary for this line is Pyke.

The first Empyrean, Pyke, tears through the realms on a destructive rampage against his counterparts, birthing new Empyreans in the process. Who will reign supreme as these new powerhouses emerge, and what will they do with their rapidly dwindling time left? Pyke remembers little before falling into the embrace of the Foreglow, only that he was defending his home. Waking in a new realm as the first Empyrean, he hears the whispers of other Pykes across the dimensions, taunting him from their homes. Why was his lost and not theirs? No answer will satisfy his searing rage, except vengeance. Hailing from a realm where he failed to protect his kingdom from annihilation, Jax was content to live in exile, until everything collapsed. Now an Empyrean, he knows that somewhere out there his kingdom is still intact. Even if it destroys him, he’ll use all of his power to see his home one more time. Jhin woke as an Empyrean with a sensation he’d never known before: true warmth. Exhilarated by the power, he set innocents ablaze with a flick of his hand. Finally, a muse worthy of him! The realization that “she” is slowly killing him only charms him more. Now if only he could find her source… Forced to live in squalor and shame for her magical abilities, Lux ironically escaped certain death when her realm collapsed. Now with the raw power of the Foreglow, she’s free. It doesn’t matter that she’s on her last legs: she intends to live and experience as much as she can before the fire consumes her. Vex didn’t need anyone. Growing up alone, she was self-sufficient and annoyed by most people. Her realm’s destruction barely made her blink, but her new Empyrean powers did give her an idea. By empowering her own shadow, she finally had a companion she tolerated. Vex may not need anyone, but then again, misery loves company. The Foreglow affects everyone differently. For Zac, it burned away all of his insecurities, but opened up his senses to the loneliness felt by the other Zacs across the realms. They needed him, and now he has the power to bring everyone together as one. A family reunion for the ages. The Foreglow is a power many desire, but Zed resents how it exposes him. His is a strength born from darkness, away from prying eyes. Perhaps in the fallen Husk realm left in Pyke’s wake can he build a new domain of shadows, one that no Empyrean can topple. K’Sante prides himself on leading under adversity, but this is a challenge unlike any other. His realm is gone, he’s living on borrowed time, and the other Empyreans don’t realize that something released the Foreglow. Something bad. He knows only they can fix it, but they need their eyes opened. They need a leader.

K’Sante’s always been a trailblazer on the fashion circuit, and this year he definitely wants to make the audience sweat. With his crystal-laden drip and flawless makeup, he’s about to light a fire under this Gala.

Date of Release and Prices for Empyrean LoL skin line

Planned date for release of this skin line is November 3th.  For prices all of the skins except Empyrean Pyke (Legendary) will cost 1350.

Empyrean Pyke will cost 1820 RP and Prestige Empyrean K’Sante would need Mythic Essence to be able to obtained it.