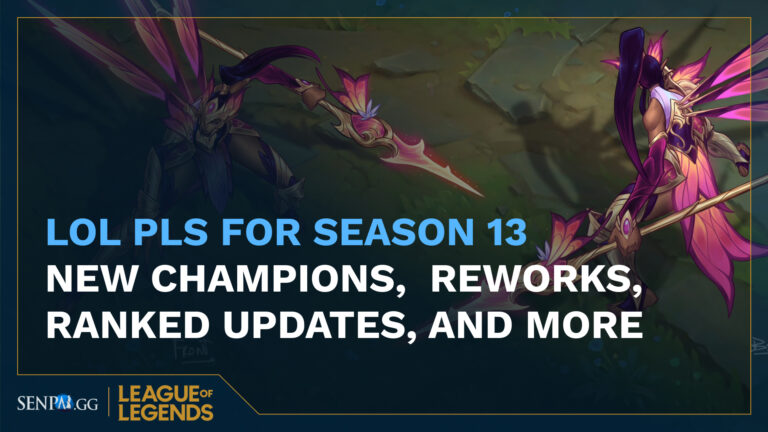 Season 13 already started, and as a yearly tradition, Riot released their LoL Pls to give details for what’s coming. Ahri ASU, Aurelion CGU, New Champions, skins, and more… learn everything on this SenpAI entry.

Season 13 is just starting and if you want a good headstart feel free to check out our tier list, with every details about which are the best champion, items, and runes for every role in the game. Check it now.

After a quick recap with all the changes in Preseason, Riot Brightmoon talks about all of the upcoming content for these next months planned for Season 13.

Champion Changes for League of Legends 2023

Success of reworks and mid-scope updates it’s undeniable, for that reason Riot Lexigao herself shares that there are going to be much more of them in this League of Legends Season.

This update will come with changes in her base appearance, vfx, skins, splashes and all. The new E model looks more fair (not as disjointed)

Quick update: After comments in social media, Riot LoL Design Team made some tweaks in the skins

I'm helping out with Ahri ASU PBE feedback! Below are some changes I made you should be able to find on PBE soon™ 🦊 Starting with a bit of a makeup tweak for Coven Ahri! pic.twitter.com/5QUhQjUZOZ

Finally there are more news regards Aurelion Sol CGU, to find out more details in depth you can check this article. Long story short, all his kit is changed, turning him from a roaming mid laner into a scaling pick.

The new ultimate looks very OP, and with this Stardust scaling passive, expect him to be a power house.

Date of Release for Aurelion Sol CGU is planned for February in patch 13.3.

Changes to Ranked for LoL Season 13

Chris “Riot Auberon” Roberts, project lead from the Gameloop team, or the team that works on matchmaking (Ranked and Normals), talked about all the upcoming changes for ranked this season.

Yeah, now there are going to be two ranked splits, taking each one half of the year. This change was announced back in December, but in this Riot Pls he told much more details.

First, to stop the worries, the middle year reset is going to be less signicant compared to Preseason one. Meaning that, if you didn’t play as much games in the previous season, you won’t be need to start all over again.

Ranked Skins for Each Split

The other good thing, there’s going to be a new set of rewards for each season, in addition to the usual: ranked skin, chromas, emotes, etc.

To make things more fair for players that grind all season long, now you can obtain the ranked skin without reaching gold.

But, this come with a cost, at the moment there’s no data, but you will need to play much more games to get the ranked skin if you are silver or below.

The first new champion making appreance in this LoL Season 13 is male enchanter from Ixtal, Millio. Pretty much alike shamans in Wow, the new champion will use flame to heal champions. That’s the only detail revealed about his kit, but if you want to learn more about his lore check this post.

A year ago, in mid season Riot pls, they teased information about a new champion related to the Darkins, and here it is, Naafiri.

Unlike Aatrox, that it’s like a demon angel, the new Darkin will be have separate bodies that will pounce into enemies.

How her kit is going to work? Well, there’s no details still, but expect more information in the upcoming months.

What they do revealed is that she will be a assasin mid laner with a simple straight forward kit (Maybe like a Rek’Sai).

On these two, they only showed a teaser image. In the new jungler one, they showed a drawing of a castle that looks straight out from Castlevania: Symphony of the Night, so there’s no doubt that will be a vampire.

The artistic mid laner, in the other hand, has asian drawings, so it’s going to be a champion that plays with ancestral magical ink, maybe.

Last but not least, changes to skins

Forgotten champions that will get a new skin: Kalista, Kled, Ivern and Aurelion Sol.

Even if Aurelion Sol it’s predictable due recent changes, it’s nice to see that champions like Kalista and Ivern are getting some love, despite their low pick rate (Poor Ivern).

On the skins itself, they only shared an art concept for Kalista one, showcasing some beautiful.

Situated in the Fae realm, this an concept image for the possible upcoming Kalista Skin. Also, Karma will get one too.