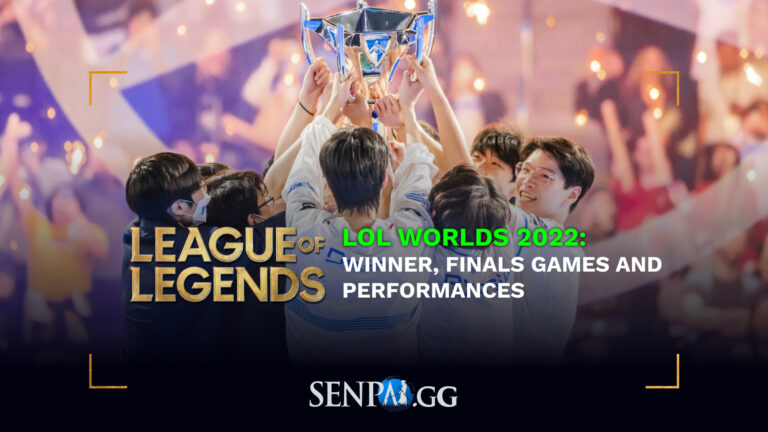 Season 12 Worlds just ended this past week with one of the best finals ever in world history. In this SenpAI entry  we’re gonna talk about the finals games, worlds winners and special performances in LoL Worlds 2022.

Pre Season has just started, and with it Riot prepared a lot of changes in items (adding new ones too!), systematic changes in the jungle, return of Chemtech dragon and more. For this reason in SenpAI we have prepared an  Preseason Guide, so you are well prepared for your journey ahead of Season 13 next year.

This world finals featured an all LCK matchup. These are the teams:

The team lead by veteran Deft, and that include great names such as 2020 world champion Beryl, flied under the radar and got to finals, no one expected their winning against favorites such as EDG, the former World champion,  or the acclaimed favorite GenG, first seed of LCK.

The second team is the most legendary and popular team in LoL history, T1 After a successful spring, ended as runner up in Summer LCK playoffs, the team lead by Faker was one of the favorites before Worlds even started. Yet, no one thought of how dominating they would look like, taking down both two of the biggest LPL teams, RNG (MSI winners) and JDG (1th Seed of LPL) in a convincingly fashion.

To start up the series, the first game in finals featured a calm and collected game from T1. The 2th seed won pretty convincingly, the only hiccup was in the early game when Faker’s Azir went down against Zeka’s Sylas from Pyosik gank.

But after that it was only solid performances across the board from every T1 player. Winning the first game and lead the score by 1-0

2th game – DRX Win –  Close with a Comeback in the end

Unlike the first game of the series, this packed much more action.  Thie game went back and forward, both teams had the advantage and one point.  At one moment , youu could say that at one moment DRX was close to get Dragon soul and win the game, but T1 backed by an amazing performance fromt Keria’s Lux that almost gave them the game.

Despite on being in a winning position from a pickup of Pyosik’s Viego, in baron DRX made a comeback play featured by Deft’s Varus in a 4v5 position against T1. Despite T1 having the dragon soul, DRX Baron’s Fight led them to win this game. Leaving the score at 1-1.

DRX had momentum in the early from previous game, having a lead in kills of 8 to 4 in minute 20. DRX had a firm lead, but T1 maintained their temple and didn’t succumb. The game turning play happened in a Baron fight at the 24 minute mark.

DRX was trying to get the Baron Nashor buff after killing Faker in a siege turret defense,  but T1 Oner sneak in and stole the buff. After stealing Baron buff, T1 manage to get Drake and kill most of DRX members. Even with the advantageous position, DRX managed to cach Faker again but again their Baron was stealed, but this time by Gumayusi’s Varus.

This game was a pretty convincingly win from DRX much like first game of T1. After many smart pickups by T1 that glance a little hope for game,  but this attempts were shutdown easily by Kingen’s Aatrox performance in team fights. Easily one of the best solo performing games of worlds finals. 2-2

Back and forwards this match featured a Baron steal once again from Gumayusi’s Varus, several picks and close teamfights. At the end, despite T1 founding two Nashor buffs, failed to close up the game and all it went to an Ancient Dragon teamfight that was won by DRX, then T1 went for a base push with both tps of Zeus and Faker but Kingen managed to defend it successfully. After that, DRX pushed with Ancient buff and ended the game.

Key takeaways: Bard and Hecarim picked by Beryl and Pyosik. This shake up the Pick and Ban phase.

After this intense series, that was decided until the last moment in an Ancient Dragon fight, just only one team must lift the cup and in this case was DRX, and well deserved so. Coming as LCK 4th seed would be crazy to predict this “middle pack of the team” would win the entire thing.

DRX Without an easy road whatsoever in worlds went thru playins, finishing it with a perfect score.  Then in groups, they ended up being 1st seed in the group stage.  Beating tournament favorites such as EDG (former world champion), GenG (1th LCK seed) and to top it off beat in finals the legendary T1. One of the best runs in World History ever, and the first team who went thru playins to take it all.

Both teams had amazing performances and you could even argued up that Keria deserved MVP despite losing the series, but we cannot state out the fact of how important was Kingen in the results for Game 4 and 5.

Just for that reason he deserved the MVP.  At the end, because how close this series was, the better team won and in a nail biting fashion.