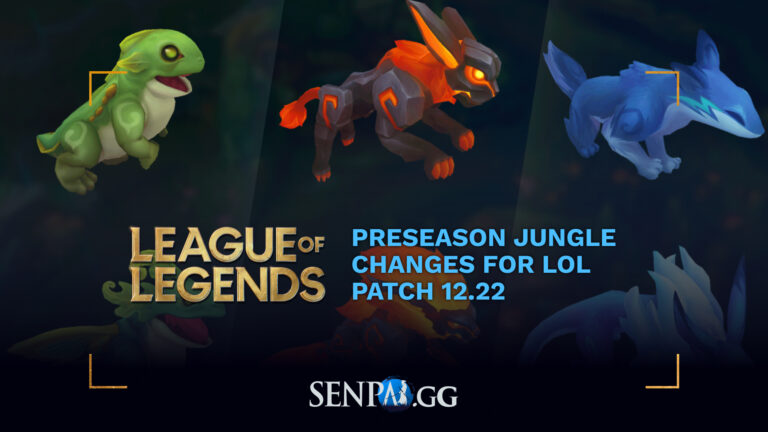 The landscape for Season 13 is being settled as we speak, and the beginning starts on this patch 12.22 AKA Preseason Patch. Besides changes in items and systems, the jungle overall it’s probably the area with more changes, including new jungle items and pets, neutral monster adjustments,  system changes and more. Without further ado, in this SenpAI entry we’re gonna talk about Jungle changes for LoL patch 12.22

Our SenpAI app it’s always collecting information on new ways to play the optimal game, best runes and items setups and the most high performing skills for every champion in LoL. You can try it in here and begin to get you over the edge.

What is this? Now jungle items are going to be chibi pets that need to be evolved much like a pokemon. These companions are going to replace the jungle started items, so Hailblade and Emberknife are removed from the game.

To make the jungler more beginner friendly, Jungler companions will aid you to clear champions, making it in a way less punishing to do faster clears especially when learning the role. And when evolve, they come with powerful effects tailored to different playstyles.

Similar to previous smite items, the pets are going to evolve throughout the game and give additional effects.  For them to evolve you need to collect Treats that you’ll give to them and once you reach a threshold, pets evolve.

To gain Treats you need to either kill jungle camps and champions, or you’ll get them over time (Intended as a comeback mechanic).

As they evolve smite will change. First evolution is going to improve true damage on monsters, can be castable on champions and slows,and have a different icon.

The second evolution or last is going to give special effects depending why companion you chose. Smite damage will be increased to 1200 against monsters and will do 50% of its damage as AoE damage against nearby monsters

As jungle companions evolve, they will receive the following bonuses depending you choose at the beginning

All neutral monsters have more HP, in order to balance with new changes of pet companions. Damage to jungler creeps is going to be lowered tho, but now every neutral monster has a new hit damage passive that will deal 3-5% of  current target health.

Damage to Rift herald is going to take a hit but now is going to grant more experience for allies within close units.

These Rift herald changes have the intention to nerf the early influence its having in games, make it more of a balanced objective, and taking into account new exp changes in top lane, this may be a preemptive move towards mitigate the snowball in the top lane.

The possibly biggest change for early game in the jungle would be the spawn time of Rift Scuttler, going from 3:15 to 3:30 (Now Scuttler haves more HP and lost the shield).

This affect slow clear and high clear junglers. Previously junglers that couldn’t do a full clear before 3:15 were crippled to less optimal routing compared to more faster ones. This lead to an advantage in early game and kind of less for versatility for many champions in the jungle role.

Now with these changes along with HP and companions will shake up the jungle meta amidst of season 13 in patch 12.22.

To make it more balanced for junglers and to prevent sidelaners abusing the strategy of taking camps, preseason is going to make changes for junglers and laners regards experience and the gold given by camps.

Now junglers won’t be able to abuse experience for solo lanes. Junglers without evolved pet receive only 75% of the experience from lane minions. The only exception of this rule is when the jungler players is below the average level, so experience is given full to enable comebacks.

The good part is that changes in HP is going to push away sidelaners that want to take camps to keep the ball rolling, as new numbers make clearing camps as sidelaners much more slower.

Large monster experience for non-junglers will now give 15 less of experience while Ancient Krug is going to give less 12 experience.

In an effort to make the jungle more welcoming to players unfamiliar with the role, we’ll be adding visual leashing indicators that will show how far camps can be pulled before their patience starts diminishing. We’re also decreasing the distance camps can be pulled, so no more having to stand on the perfect pixel to clear two camps at once in order to hyper-optimize your clears.

Last but not least, to make the jungler more welcoming especially so in the first games playing the role or just trying a new champ. the game is going to signal in the map what’s the recommended clearing route for your champion.

This is one of the changes made to help the jungling role overall, and maybe to increase popularity.