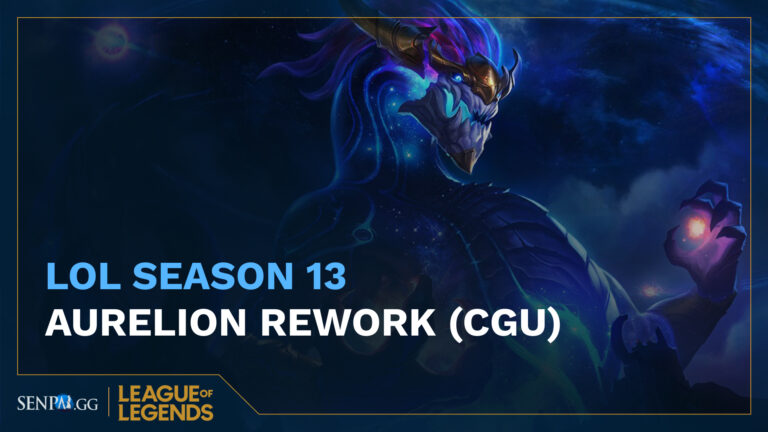 After much time waiting, since Riot Reav3 update, we are getting the long waited Aurelion Sol Rework, or at least a sneak peek in the LoL PBE servers. Learn about all the changes for this Celestial Dragon for LoL Season 13 in this SenpAI entry

Quick update: On a tweet from League of Legends official account, they have officially stated that patch 13.3 will bring Aurelion Sol CGU, along with a post with a rundown of his abilities.

If you’ve been following the entries regards Aurelion Sol, you would know how important it’s this changes for the Star Guardian.

Although you cannot deny Aurelion Sol’s gorgeous visuals, amazing concept, and great win rate throughout the seasons, he has always suffered for an abyssmal pickrate, and even worst flack for his own subreddit.

Aurelion Sol’s damaging abilities break down enemies into stacks of Stardust, which permanently improves each of his abilities.

Aurelion Sol channels his dragon breath for a few seconds, damaging the first enemy hit and splashing reduced damage onto nearby enemies. Each second the breath is channeled directly at an enemy will deal bonus damage, which is improved by the amount of Stardust that’s been collected. This ability collects Stardust if the target is a champion.

Aurelion Sol flies over terrain in a targeted direction. While in this state, he can cast other abilities. Breath of Light no longer has a cooldown or maximum channel duration and deals increased damage while flying. Astral Flight’s remaining cooldown is reduced whenever an enemy champion dies after being recently damaged by Aurelion Sol. Stardust increases Astral Flight’s maximum range.

Aurelion Sol summons a black hole, damaging enemies and slowly pulling them toward its center. This ability grants Stardust each time an enemy dies within the black hole and for each second an enemy champion is caught inside it. The center of the black hole executes enemies who are below a certain percentage of their maximum health. Stardust increases Singularity’s size as well as the execution threshold.

The Skies Descend: Aurelion Sol drags a giant star down from the heavens with an increased impact zone and increased damage, knocking up enemies rather than stunning them. A shockwave then spreads from the edge of the impact zone, which damages and slows the enemies it hits. Stardust increases the impact area of both Falling Star and The Skies Descend.

The current Aurelion Sol plays as a heavy roaming mid laner, focusing mainly to facilitate other teammates to win games. Aurelion Sol after the Rework in LoL seems to be quite the contrary, although he would still have his W (Similar to his old E), this entity new playstyle will entirely rely on his scaling abilities with Startdust, making it more of a late game monster.

Why he’s getting changed?

Despite beautiful visuals and lore, Aurelion Sol has never been very popular to the game (and his kit very difficult to balance). According to our SenpAI’s champion page, Aurelion Sol it’s the champion with lowest pick rate in the entire game, only a 0.36% Pick rate, the following champions are Ivern with a 0.49% pick rate, and Skarner with 0.53% pick rate.

Although numbers aren’t quite telling, it’s huge compared to most popular champions like Mordekaiser (10th most pick and a 14.85% pickrate), and Kaisa (5th most picked and a 19.5% pickrate).

Aurelion Sol it’s the first attemp from Riot to make a CGU – or Comprehensive Gameplay Update.  What it differentiates from a Visual Game Update is that will make an entirely rehaul of all champion abilities (including visuals).

Hence all of the champion kit it’s entirely new, and to keep truth to his design and story, it will match the idea of the champion, identity and role in the game.

Aurelion playstyle of pushing + roaming, has always been very strong in Solo Que. His current E – Comet of Legend allows him to freely move to sidelanes and get takedowns. For instance, his win rate right now is 55%   – not bad at all.

The problem it’s that his gameplay is clunky and requires a lot of mastery of his W – Celestial Expansion positioning, and even if you master him it can feel quite underwhelming.