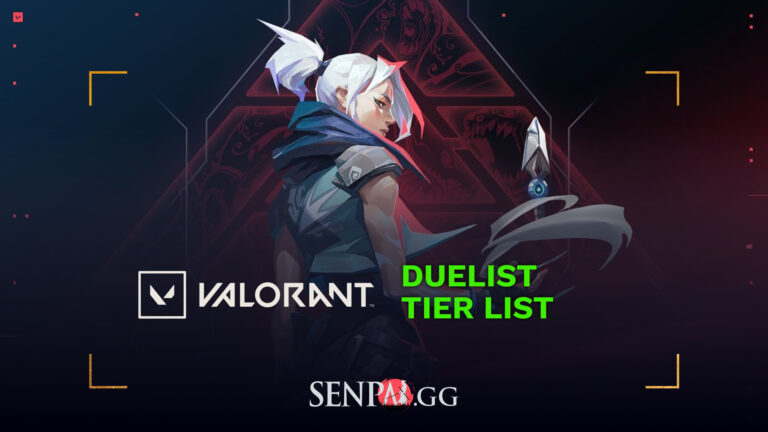 Welcome to the detailed guide on the Valorant Duelist Tier list; we have compiled the Tier List based on the current pick and win ratio. This Tier List will change according to the patch.

Neon is the 6th duelist added to the Agent Pool

Neon is suitable for players that like fast-paced gameplay; Neon’s abilities allow her to make quick entries and fast rotations.

RELAY BOLT, Neon fires an energy bolt that bounces off the surface and applies concuss on the players.

HIGH GEAR is Neon’s signature ability; activate this ability to increase your movement speed, and right-click while running to perform a slide. It takes two kills to reset the sliding charge.

Yoru is the 15th Agent added to the Valorant agent pool. Yoru is the perfect Agent to make flashy plays on the battlefield.

Yoru’s first ability, FAKEOUT, allows him to equip an echo that transforms into a mirror image. Fire this ability to send the mirror image forward; this image can only travel straight. This image looks like Yoru and explodes into a flash if destroyed by the enemies.

The next ability is BLINDSIDE; equip an orb and Fire to throw the orb at a wall or surface to activate the flash.

Yoru’s signature ability is GATECRASH, Equip and fire the ability to send a rift tether forward, alt-fire to place a stationary tether, activate the ability to teleport to tether, and you can also fake a teleport.

Yoru’s ultimate ability is DIMENSIONAL DRIFT; activate this ability to turn invisible and increase movement speed; you are invulnerable during this state, and activate the ability again to leave the dimension.

Phoenix is one of the first duelists available to play since the Beta.

Phoenix’s first ability is BLAZE; Phoenix equips a flame wall, Fire to send the wall forward and block vision. Hold Fire to control the direction of the wall. Blaze heals Phoenix and damages enemies that come in contact with it.

CURVEBALL is a blinding ability. Equip an orb and Fire to curve the ball, blinding any enemy within its line of sight. ALT fire curves the orb to the right.

Phoenix’s signature ability is HOT HANDS; equip a ball of Fire to throw it, creating a lingering fire zone. This ability heals Phoenix and damages the enemies.

Raze is one of the first duelists available since Closed Beta, and Raze’s abilities help dish out massive amounts of damage.

Raze’s primary ability is BOOMBOT, Equip and fire to send forward a boombot. Boombot will lock onto enemies in its front line of sight, moving towards them with an increased movement speed; once the bot comes in contact with the enemy, it explodes, dealing heavy damage.

BLAST PACK, Fire to throw a blast pack that sticks to the surface, and re-use the ability to detonate a blast pack.

Raze’s signature ability is PAINTSHELL; equip a grenade and Fire to throw the grenade. Alt fire to lob the paintshell.

SHOWSTOPPER is Raze’s ultimate ability: Equip a rocket launcher and Fire to shoot the rocket that deals massive damage.

Reyna is the 4th duelist added to the agent pool. Reyna’s abilities are straightforward, making her a beginner-friendly duelist. Enemies eliminated by Reyna create a Soul-orb, used to activate Reyna’s abilities.

Reyna’s first ability is LEER, Equip and fire this ability to send forward an eye. The eye will near sight all the enemies who look at it.

DEVOUR, and consume the soul-orb to regen your health rapidly. Any health gained over 100 points will be shown as overheal and decay with time.

DISMISS is Reyna’s signature ability. Reyna consumes an orb and becomes invulnerable for a short moment, and this skill will make you invisible if Empress is active.

EMPRESS is Reyna’s ultimate ability. Activate the ability to gain increased Fire, Equip and Reload speed. Reyna will have infinite soul harvest charges during this ability.

Jett’s first ability is CLOUDBURST, throw a smoke that blocks the vision for a brief amount of time. Press the hold the ability key to control the direction of the smoke.

UPDRAFT activate this ability to propel Jett high into the air.

Jett’s signature ability is TAILWIND; activate to prepare the ability; when the ability is active, re-use again to dash towards the direction you are moving.

Jett’s ultimate ability is BLADESTORM, activate to equip a set of knives. Fire to throw a single knife or Alt fire to throw all the knives simultaneously.

This brings us to the end of our Valorant Duelist Tier List.

Learn more about Valorant through the below links.