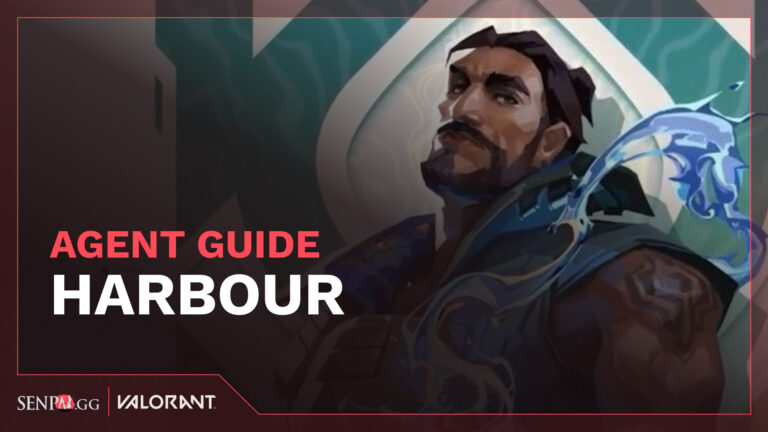 Welcome to the Valorant Harbor guide.

Harbor is Valorant’s latest addition to the agent pool.

A lot of players that are new to Harbor haven’t been using his abilities to the fullest potential. As a result, Riot gave Harbor a minor buff in the latest patch, 5.10..

Harbor Guide for Beginners in Valorant

Harbor is a controller agent. A controller is someone whose abilities allow them to assist their team by cutting off the enemy’s vision, forcing the enemy into choke points, and taking control of an area.

As the role suggests, Harbor’s abilities allow him to effectively be a controller and offer incredible support to his teammates.

Keep reading to learn about Harbor’s abilities and how to use them,

Harbor equips a wave of water. Fire the ability to send the wave rolling forward. Re-use to stop the wave. Players hit by this ability are slowed by 30%. Cascade can pass through walls.

Cascade can be used as a vision blocker during the attacking phase. Since Cascade can pass through walls, you can block a point of enemies’ vision from safety. If any enemy decides to pass through the wall, they will be slowed, making them an easier target to kill.

While defending, block off the entry point to a bomb site. Enemies wouldn’t normally dare pass through Cascade because it is not only a smoke ability but also a slow ability.

Cove is a shield ability. Equip a sphere of water with fire to throw it. Alt-firing will underhand throw the ability, similar to grenades.

When the ability hits the ground, it transforms into a sphere of water shield that blocks bullets. The shield has 500 HP before losing its ability to block bullets.

Cove works both as a vision blocker and a shield ability. The cove is a great support ability. Use this ability on yourself or your teammates while planting the spike; this can ensure a safe plant.

While defending, Cove is best used when defusing the spike. Keep in mind that Cove has 500 HP before it loses the ability to stop bullets.

High Tide is Harbor’s signature ability. Equip a wall of water. Fire propels the water forward, creating a wall. Press and hold the fire key to control the direction of the water. Alt-firing will stop the water early.

This ability can pass through the world, and players hit by High Tide are slowed.

High Tide is a huge vision-blocking ability similar to Viper’s wall. What makes it better than the Viper wall is the ability to control the direction of the wall.

High Tide has a large area of effect and can block multiple points in the enemy’s vision.

This ability allows Harbor to be an effective agent on large maps like Breeze.

Harbor’s ultimate ability is Reckoning. Equip the ultimate ability and fire to summon a geyser pool on the ground. The ability targets any enemy present within its area with successive geyser strikes.

Players within the strike are concussed for 2 seconds. Reckoning needs 7 points to be active.

Use Reckoning similar to Breach’s ultimate ability. Though Harbor is a controller agent, Reckoning allows him to also be an initiator.

Use Reckoning on a site while attacking to catch the enemies off guard. Players are concussed for 2 seconds, which should be enough for your duelist to charge into the site and get picks.

In the defending phase and while retaking, Reckoning can be a huge game-winning ability. Use it the same way you would during an attack on a bomb site.

Check out our Voice assistant for Valorant.