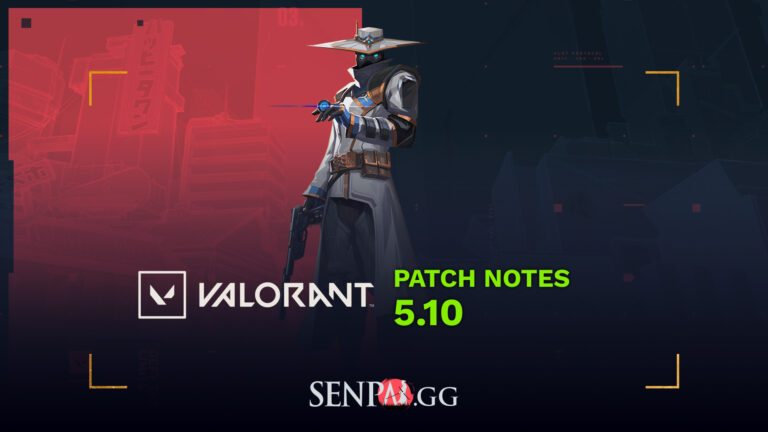 With the current popularity of Valorant, Riot Games never fails to constantly update the game by releasing new patches. Let us take a look at the Valorant patch notes 5.10. We will explain the balances, buffs, and nerfs in this patch.

Riot Games has addressed one of the larger issues that the players had with Fade and Cypher. This also includes several changes to the agent, such as bug fixes and a new feature called “Real Time Text Evaluation.”

This new system allows the players to feel safe when engaging with their teammates and enemies.

Cypher has received a huge buff in this patch. He has been noticeably absent from the roster recently.

The release of Chamber could be one of the reasons, with the other being that players are easily able to counter Cypher’s trap wires because they have become too predictable.

Trapwire distance has now increased, which unlocks new possibilities for Cypher’s setups. These new changes to the trap wire will now make the enemies tread carefully.

A few changes have been made to Cypher’s ultimate ability as well; his ultimate, Neural Theft, will now reveal the enemies twice with a four-second delay between the reveals.

The time limit for using Cypher’s ultimate on an enemy corpse has been removed, and we believe that these new changes to Cypher will definitely make him relevant again, as evidenced by an increased pick rate.

The maximum trapwire length has been increased from 1000 to 1500 meters.

Enemies are now shown twice. There is a four-second delay between the reveals.

The time restriction for casting on enemy corpses has been removed.

updated the yellow silhouette used for Cypher’s reveal on Spycam and Neural Theft.

The yellow silhouette now disappears if the revealed enemy becomes visible to you, helping to reduce confusion from seeing two representations of the enemy in different places.

The yellow silhouette now starts to fade faster to make it more distinguishable from an actual enemy.

The yellow’s placed utility is no longer destroyed by allies’ AOE damage.

Riot believes that Fade’s prowlers are versatile and challenging to play against. Prowlers received a few changes.

Overall, Fade has received significant nerf in this patch.

Duration decreased from 3 to 2.5 seconds. (The prowler is alive without a trail.)
The time it takes to bite after reaching the target has increased. 4 seconds >>>.6 seconds

Nearsighted hit duration reduced to 3.5 seconds instead of 2.75 seconds.

Prowlers now fizzle out and no longer debuff their target if they teleport away before it completes its animation.

Many players that are new to Harbor are not using his abilities very often. Harbor received only a single change in this patch; his ability, Cascade, now holds an extra charge. The number of purchasable cascade charges changed from 1 to 2.

This is a minor buff for Harbor.

Bug fixes on agents include Astra, Chamber, Harbor, and Neon.

You can find these changes below.

In addition to our existing interventions, we are launching a new feature to begin muting players in chat who send disruptive text messages in game. Interventions for disruptive text will now be applied sooner rather than later as we continue updating our systems to evaluate more types of text communication.

These improvements will be added to North America first and expanded to more regions in the near future.
With the implementation of more immediate text evaluation, we hope to detect and reduce disruptive situations while players are still in the game and help you feel safer engaging in VALORANT.

Menus Update: Having heard the pain caused by removing one-click access to most of our menus, we’ve returned that functionality in the form of icon buttons in the universal navigation at the top of the screen. You’ll now be able to jump from Home, Battlepass, Agents, Career, Collection, and Store with one click from anywhere. Not sure what an icon is? Give them a hover—we’ve added tool tips to help you familiarize yourself.

Like most changes, this one isn’t final, and we’ll adjust based on your feedback!

Doors will now destroy placeable objects as soon as they come into contact with them, as opposed to only the moment the door is closed

Fixed an issue that caused the “Auto-Reject Friend Requests: On” notification to be misaligned in the Social Panel for some languages.

Fixed a bug where Astra could cast a fake Nebula right at the start of a round before her Star charged up.

Fixed a bug where Chamber would fail to equip a gun at the start of a new round.

Harbor’s Cascade is now visible on the minimap for enemies who can see it.

Fixed a bug where Harbor’s Cascade would sometimes spawn under the map.

Fixed a bug where Harbor’s Cascade targeter on the minimap would shorten when aiming up or down even though the Cascade would travel the same distance.

Fixed a bug where Harbor’s Cascade targeter on the minimap was slightly shorter than the actual distance it would travel.

Fixed a bug where Neon’s Slide could be used to boost upwards in specific map locations.