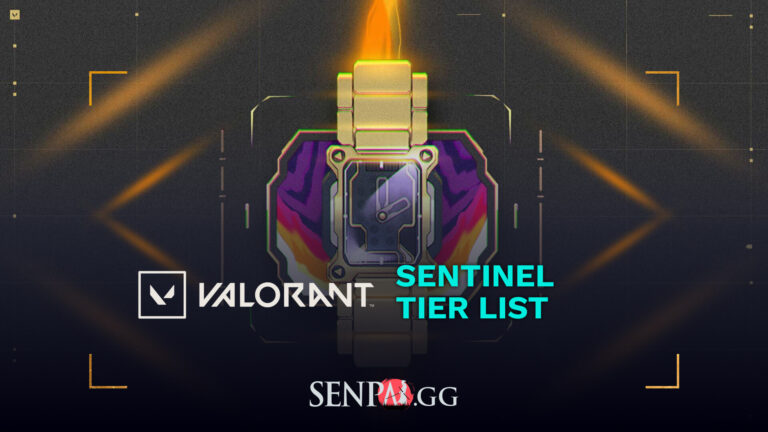 Welcome to the Valorant Sentinel Tier List; we ranked the Sentinel Agents in Valorant based on the current pick and win ratio.

Killjoy is the third Sentinel added to the Valorant Agent Pool.

Killjoy’s first ability is NANOSWARM; Equip and throw a grenade. Activate the ability to create a nano swarm damaging any players in its area.

ALARMBOT; Equip and place an Alarm Bot. Enemy players that come within the range of the alarm bot make it explode and apply vulnerability on the enemies.

Killjoy’s signature ability is TURRET; Equip and deploy a turret that fires at enemies within its line of sight.

Killjoy’s ultimate ability is LOCKDOWN; Equip and place a lockdown device that covers a large area of the map and detains any enemy remaining in its location for a brief time.

Sage is one of the first agents available to play in Valorant since the Closed Beta and the most played Sentinel during that stage.

Sage’s first ability is BARRIER ORB; Equip an orb and fire to place the wall that fortifies for a few seconds. Enemies cannot pass through this ability.

SLOW ORB; Equip and throw a slow orb; upon landing on the surface, it creates a slow field. Enemies caught in its area have their movement speed reduced.

Sage’s signature ability is HEALING ORB; Equip a healing orb, and fire at an ally to apply a healing effect. This ability will heal you or your allies over time.

Sage’s ultimate ability is RESURRECTION; Equip the ability and use it on an eliminated teammate to resurrect them. Sage will bring the ally back to life in total health.

Chamber is the fourth Sentinel added to Valorant Agent Pool.

Chamber’s first ability is TRADEMARK; Equip and place a trap that scans for nearby enemies and alerts your teammates. Trademark slows the enemies caught in its range.

HEADHUNTER is a heavy pistol. Activate to equip a gun that does high amounts of damage, and right-click to aim-down-sights.

Chamber’s signature ability is RENDEZVOUS; Equip and place a teleport anchor at two locations. Active the ability to quickly teleport from one location to the other.

Chamber’s ultimate is TOUR DE FORCE; Activate the ability to equip a high-powered sniper rifle. Any enemy eliminated by this ability creates a slow lingering field around their body.

This brings us to the end of our Valorant Sentinel Tier List.