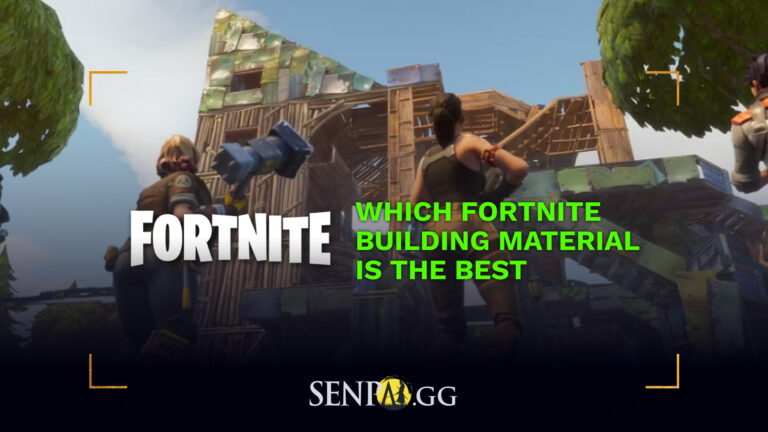 Refrain from letting all your hard work in the Fortnite building go to waste by settling for inadequate supplies. Differentiating Fortnite from other Battle Royale games like Apex Legends is Epic Games’ intricate building mechanic.

Fortnite Battle Royale features three distinct construction mediums. Wood, stone, and steel are the three materials. There are benefits and drawbacks to using any of these materials in construction. We’ll evaluate each one carefully to determine the greatest for constructing Fortnite.

In Fortnite: Battle Royale, the stone is the best resource for constructing structures. It’s hard to find a better compromise between how quickly you can harvest material and how long it will last than the stone used in construction.

You can soon gather stones for construction projects if you know where to look. Fortnite players can get more than 100 stones from a single giant rock on the Battle Royale map.

Stone is a sturdy construction material, but it takes some time to recover to total health after being set. Try boxing or other defensive strategies to protect yourself while you wait for your health to recover. Instead of taking a shield potion, you might find turbo-building stone barriers.

Compared to other materials used in Fortnite Battle Royale, wood is the most likely to collapse under its weight. But don’t dismiss this stuff only because of its poor structural health. It’s most convenient to get wood because it grows everywhere. Trees, fences, pallets, and other wooden objects abound on the Fortnite Battle Royale terrain.

Wood’s little holes in its walls, staircases, cones, and floors are an unusual pro for this material. This way, players can still keep an eye on the action even if walls or stairs fully encircle them. Be wary, though, because the tiny openings might also let your enemies spy on you from the outside.

However, until they shoot a hole in your wall, they won’t be able to hurt you. Wood may be the weakest structurally, but it’s not the lowest in the game of construction materials. Since wood is abundant, players can handle running out of resources when constructing fortifications.

Wooden structures pose a risk of catching fire, so take care. Wages from Flare Guns, Firefly Jars, and Dragon’s Breath can be severe if they ignite your wooden structures. Switch to a more durable material like stone or metal to keep construction going.

In both Fortnite Save the World and Fortnite Battle Royale, metal is the most powerful of the three resources used in the games. Metal is the most helpful substance but is also the hardest to mine. Particularly now that Fortnite’s third season added the ability to drive cars in Season 2.

During the Fortnite Seasons, players could quickly and easily drop by Steamy Stacks before introducing driveable automobiles to grab maximum metal. Getting to max metal is much more challenging now that Fortnite Season 3 Chapter 2 reduced the elements acquired from cars.

Metal isn’t among the best building materials in Fortnite because it’s so hard to come by. Despite the scarcity, there are still reliable methods for mining metal. Metal pallets, shipping containers, and fences are just some of the metal objects you can find in Tilted Towers.